OUR collective sentimentality (and the thoughtless neglect of our master traditional musicians) aside, there was little, really, to inspire popular music culture in Malaysia post P. Ramlee in the 1970s and early 1980s.

Till the emergence of the “boys from Singapore” – M. Nasir and Ramli Sarip – that is.

In Kembara and Sweet Charity, a ruggedness born of slugging through numberless gigs of trial, the move up North to a kind of artistic exile, combined with the innate musical intelligence and vision of the groups’ front men – M. Nasir and Ramli, respectively – would signal a new and radical direction for popular Bahasa Malaysia music, most notably in the roving adventurism and search for roots which defined the preoccupations of the smartest and most introspective performers of this generation. 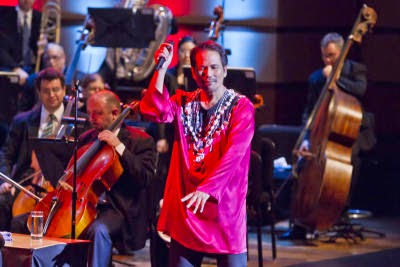 Craft and sophistication: M. Nasir performing with the Malaysian Philharmonic Orchestra. His songs are as timeless, strong and evocative as they have always been.


Of these, M. Nasir proved especially viable, carving a career for himself that was multidimensional in nature, with forays (apart from his versatile musicianship) into the worlds of film, composition and the business of music. Always astute, he has continued to perform the delicate balancing act of creating for others so that he may keep the best and most spirited for himself.

Following the days after Kembara, and since the release of the brilliant Canggung Mendonan, the songs and albums have been fast, furious, experimental and stylistically eccentric – creating a trove of songs that remain among the richest and most resplendent in the history of popular Bahasa Malaysia music.

Something in the elements must have converged on the twin independence dates of July 4 and 1957 to spark the “spirit” of M. Nasir. “Soul” and “spirit”, the couple energies that urge the traditional Malay notions of artistry have, in M. Nasir’s own words, inspired his own approach to song crafting.

“Music has to have its soul and its own original form. The soul must be strong and the form must be clear. Its form must be able to be heard and to highlight its true original self – the form must be expressed as required by the soul or spirit,” he has stated.

It is a profession of “faith” that was put to test at a two-night concert with the Malaysian Philharmonic Orchestra last weekend to celebrate the 55th year of M. Nasir.

For all the craft and sophistication of M. Nasir’s music, the songs retain an elemental rawness which is their hallmark. Challenged within the settings of the “respectability” which exudes the Dewan Filharmonik Petronas, the songs emerged as timeless, strong and evocative as they have always been, even as the arrangements and presentation came across, at times, as bewildering, perplexing and lacking quite some common sense.

A revised setlist meant that several classic songs, announced in the original list, were not to be heard, including the spry Kembara classic Express Rakyat, the magical Tanya Sama Itu Hud Hud and the stirring Ghazal Untuk Rabiah.

The concert itself commenced with a remaking of the mystical Andalusia, stripped off its poetical allusions and transformed into a neo-Bolero version not unlike the overwrought standard Granada. For much of the concert, a tension ensued between the essential vitality of the songs themselves and the attempt to make sense of them within an orchestral setting, often resulting in a show tune feel to the arrangements.

Keroncong Untuk Ana, undoubtedly one of the most moving songs in modern popular Malay music, came across as discordant following an introduction by the horn section of the orchestra. It was the melodic irresistibility of the song itself, as well as M. Nasir’s deeply felt vocals that saw the song through.

Bonda, Apokalips and the captivating Juwita Citra Terindah proved the highlights of the evening’s repertoire with clever arrangements and soulful, stirring performances by M. Nasir.

Culminating with the classic Mentera Semerah Padi, also intelligently arranged, the concert nevertheless continued to suffer from a prolonged tension between the earthiness and spiritedness of the material and the restrained control of setting and arrangement.

The Malaysian Philharmonic Orchestra itself appeared ill at ease with the material performed and in spite of the best efforts of its animated conductor Kevin Fields, came across more often than not as listless if not completely baffled by the repertoire and its performer. There was little indication that the orchestra empathised with the figure of M. Nasir.

The figure at the centre of it all, still youthful, vigorous and boyish was in luring form – funny, timeless and flawless in voice. But for a few slips of timing and coordination, his was a felt performance.

Perhaps the deepest irony lay in the interpretation of the material itself. It would have been a good stretch of the imagination to have featured a traditional ensemble of gendang, the kind of which regularly accompanies an M. Nasir performance these days, along with the orchestra. The distinct syncopated rhythms, singular to an M. Nasir composition were sadly amiss. Yet, it was in this paradox of voids and vacuums that the deep individuality of the M. Nasir song was in fact enhanced.

A delightfully playful line refrains in the song Apokalips that best encapsulated the evening’s experience: “Ada masanya engkau suka apa yang ku suka…” (There are times, when you like what I like).