Up close and personal with M. Nasir

In the next room, an up-and-coming female singer is being interviewed, accompanied by an entourage of three. In this room, there is only M. Nasir who drove to the meeting place and adhered to the rule of signing in and getting a visitor’s pass without much fuss. After chatting with this reporter for more than an hour, he took his leave. He gave the impression of being a humble, intelligent and an easy-going fella.

The 48-year-old artiste is blessed with a sense of humour; he takes swipes at his own public image – at times, punctuating his remarks with hearty laughter. Yet, Nasir is very serious about the entertainment industry and is bashful when the topic touches on his many talents. 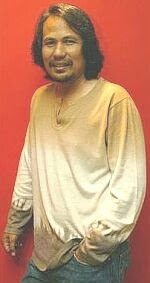 One doesn’t really know what to expect of this man who has managed to keep his life private despite being in the public eye for almost three decades. We know him as a singer, composer, producer, actor, director, writer, painter and TV host (and something he would be uncomfortable acknowledging – sex symbol).

Puteri Gunung Ledang director Saw Teong Hin who has worked with Nasir admits he wouldn’t hesitate to work with him again.

“Contrary to popular belief, I didn’t find him to be difficult at all. He’s particular about the kind of project he’s involved in, but once he’s committed himself, he is very professional and well prepared,” reveals Saw.

“And I cannot imagine anyone else playing Hang Tuah.”

So is Nasir a difficult and uncommunicative individual?

Well, he was hardly untalkative during this interview held at The Star’s office in Petaling Jaya.

No wonder then, when he gets together with an old pal like Ramli Sarip, they can talk for a long time and sometimes their topics of conversation are so wide that other musicians do not understand what the two are going on about.

Ramli, 52, and Nasir have been friends for 25 years. That friendship began when Nasir was a fan of Sweet Charity, Ramli’s band in the 1980s. Nasir’s band at that time, Kembara, was once the opening act at a Sweet Charity concert.

Later, when both artistes embarked on solo careers, Nasir was once again asked to open for Ramli at his concerts.

No wonder then, at last week’s Anugerah Planet Muzik (a Singaporean music awards ceremony held to honour musicians in the region), it was Nasir who was chosen to present Ramli with the APM 2005 Special Award.

According to Ramli, Nasir is a thinker with a sensitive side. “He is a sentimental guy. We are both shy people. I am a bit anti-social actually, but Nasir has become less shy.”

While it is true Nasir has been more accessible in recent years, it is also obvious he is uneasy when the spotlight is turned on him. Asked to pose for photos, his immediate reply is that he doesn’t pose but he sportingly leans against the wall and smiles for the camera.

Anyone who follows Nasir’s career knows that he is also a respected figure in the local entertainment industry, and rightfully so.

His contribution over the years has been limitless and from the looks of things, he plans to do more for the flagging industry. Nasir realises that knowledge is the best weapon. An avid reader, he is interested in various topics – especially philosophy and poetry. Even for his TV viewing, he favours HBO movies and the documentary channels. Hence, his lyrics are never simple, with many references to classic lore and stories from the Quran.

Nasir reveals: “Until now people are still asking what the (Tanya Sama Itu) Hud Hud song is all about. The story is told by the lyrics, by the mood of the songs. Some of the lyrics are like modern poetry and sometimes we cannot explain it.”

Admittedly the fans don’t mind, singing along happily to his songs.

Writing meaningful lyrics was something he wanted to do from the very beginning so he learned poetry by listening to songs and reading other people’s work, then writing it himself. As a matter of fact it was his lyrics that paved the way for him to be in the music industry.

Singapore-born Nasir's ambition while studying at the Boys Town Vocational Institute in the island republic was to be a scientist. Then he wanted to be a painter, and earned his fine art diploma from Nanyang Academy of Fine Art.

He recalls: “I was doing my diploma and staying with a friend, and the friend’s brother got a job with Polygram to compose songs for Alleycats. I was a wedding singer before, so I suggested to him that I write the lyrics. Erm, I didn’t want to say that I wanted to write the songs because he was a composer (laughs). A few weeks later, he got the job as a producer. And I got to write more lyrics.”

He is now leaning back dangerously on his chair (as the interview moves on to the topic of his early days), focusing on his fingernails and avoiding eye contact. 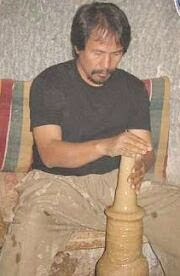 2005: M. Nasir tries his hand at pottery while in Turkey for the new TV series, Destinasi Dunia, which is screened on Astro Ria. In the programme, Nasir looks for communities who keep traditional forms of music alive.

“They were not very good lyrics if you ask me,” he finally adds with a laugh. “I coached them to sing in Malay and when I coached them, I had to sing also. So they thought I could, erm, erm, sing, so ...” he abruptly ends the reminiscing and then quickly changes the subject to his producing experience.

He was 18 at that time. Thirty years down the line, he is still churning out songs, and also dismissing the art of creative skill with a wave of his hand. “It’s all a myth that you need peace and quiet to find inspiration. It is all inside you. You just press it out.”

Nasir was married to Junainah Johari, a singer from trio Ideal Sisters in the 1980s, who passed away in 1998 from asthmatic complications. He had five children with Junainah. In 2000, he married actress Marlia Musa and has a four-year-old daugther, Suci Musalmah, with her. His first son, Mohamed Ilham who is 20, is now in a band called Hati, which has been deemed a band to look out for.

Nasir talks about his family fondly and says that he is constantly surrounded – be it in the office or at home – by bustling activity.

There is a consensus among the media that Nasir has lightened up considerably in the last few years and is less elusive when it comes to interviews.

For a guy who writes a lot of songs and produces albums for other folk, Nasir is still working on new material for his next album.

“I have been recording for almost four years now, and maybe even more. My last album was in 2001,” he pauses and asks, “You know what my last album was? Yes, Phoenix Bangkit. It was a long time ago. I don’t remember. I finish one thing, I just forget about it. I just go on with other projects.”

His other projects include working on a book – his thoughts about everything under the sun – writing a script for a movie he is going to direct, and in April he will be starring in a movie about gangsterism (directed by newcomer Brando Lee).

Okay here’s the thing on his new album: he hopes to release the album in May, but he’s still hazy about how many songs it will contain or what direction he wants the album to take.

“Everything keeps changing all the time. And in four years, things can change, you know.”

True enough, it is hard to peg Nasir’s music. Even he is unable to do so. During his Kembara days and after resuscitating his solo career in 1988, the music was rock-based. Then the songs were Nasir’s observations about Malaysian life and the arrangements had elements of traditional music.

Nasir explains: “Then 10 years ago, I was influenced by Qawwalli music. Now I want to go back to rock. If anything, my music is kind of a fusion but you can’t use that word because that term is used for jazz. But it is a fusion of many things; and the song’s semangat (soul) is what I want to express according to my feelings and thoughts at that moment.”

Guess the category has to remain as “M. Nasir’s music”. Then again, that creates another problem. One that Nasir knows only too well.

“After a while, you get bored with one kind of sound. And then there’s the danger of being labelled and pigeon-holed.”

Nasir feels that people question the authenticity of Malay music which is really a combination of other cultures, mainly from China, India and the Arab world due to Malaysia’s diverse background. Another question etched in his mind is, where is the Malaysian music scene headed?

“There’s always a clash of interests on my part because I am in the pop scene and yet in less than 20 years we might not have Malaysian music. When we talk about pop music we talk about the westernisation of Asia. And that question appears from time to time and you can’t have a straight answer, a sure answer.”

It is these questions that gave him the idea of documenting folk music of this region and after that, world music.

His idea kind of materialised with production company Beyond Events, and he embarked on a journey to do just that for a TV programme titled Destinasi Dunia and travelled to places like Turkey, India, Nepal and Vietnam late last year.

His most cherished experience was in Turkey. “I already had an idea about Turkey. Its cities, buildings and, of course, the music. The story about wars, and the young Turks, the history of architecture and culture and the landscape.”

Although it comes off more as a travel piece than a documentation of folk music, Nasir nonetheless has plans to continue with the series as long as he can, and cover countries like Morocco, Indonesia and of course, Malaysia.

As for his other ventures, Nasir doesn’t try to understand or know what other people think about what he is doing.