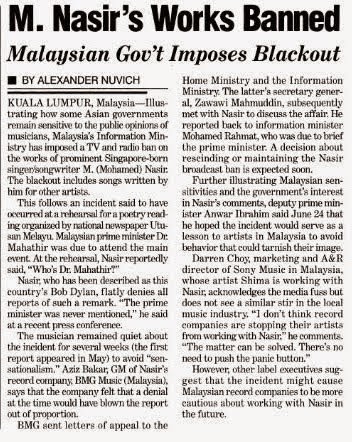 The answer is the Prime Minister of Malaysia. For everything you own, don't asked the question. Unfortunely, M.Nasir allegedly dld and the Ministry of Information replied by blacklisting his entire life's work for 14 day before lifting the ban on July 1.

Did Nasir's tongue slip or was the reporter making it up? Utusan Malaysia stands by its claim that Nasir really ask “Siapa Mahathir?” The ministry's deputy Sulaiman Mohamed said it wasn't necessary to talk to Nasir about his remark (before slapping the ban) as “he would probably deny it”

Nasir had apparently responded rather flippantly when the organisers of Malam Puisi Utusan Malaysia asked that he be pantual for rehearsals because the P.M. would be attending the recital. To make matters worse, Nasir failed to show up at the event on May 4, prompting the paper to accuse him of being disrespectful.

On Jun 17, the Information Ministry acted on the “authenticity and credibility of the newspapers” and imposed the ban without giving Nasir a hearing. Certain quarters jumped on the bandwagon and even questioned the Singapore-born entertainer's status as a permanent resident of Malaysia.

A little too late, Nasir finally decided to do damage control. “Dr. Mahathir was never mentioned (in my conversation)” he stated, and added that he could not make the recital because he had to be at the funeral of his father-in-law.

As to why Nasir waited so long to address the matter, BMG Music general manager Aziz Bakar said that making the immediate response would have only added fuel to the fire.

Because the blacklist covered not only Nasir's movies and own recordings, but performances of his songs by other artistes, the industry responded...by sitting on the fance -- wanting to support Nasir, a songwriting force, but not wanting to incur the wrath of the Information Ministry either. “lt's not just what we were losing on royalties,” says Aziz Bakar, “It's artistic quality we were worried about too”

When Nasir ban made the international news, Information Minister Mohamed Rahmat put a spin on the matter and ordered the investigation. The ministry's secretary general, Datuk Zawawi Mahmudin, said thqt during the inquiry, both Nasir and the reporter maintained their version of the story and made it “difficult for us to decide who was right.”

On July 1, the ban was finally lifted “in the interest of other artistes who are involved in the works of M.Nasir.” (Nasir is currently in Hong Kong working on his directorial debut, Merah, starring Ziana Zain and Awie. He also composing the soundtrack for the movie and writing songs for Awie second album.

Naturally, industry players are relieved that the mess is over but are still exercising caution. “We will leave it up to our artistes if they want to work with Nasir.” say EMI marketing director Calvin Wong.

“We are not about to discourage our artistes from working with him” concurs EMI local artiste and repertoire Mohd Arzmy. “The controversy will die down” 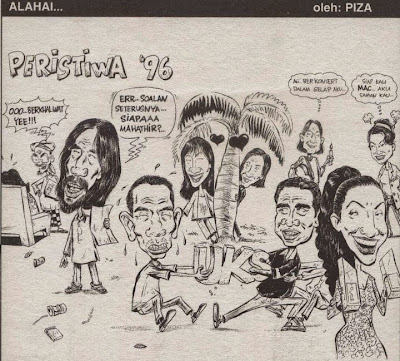 He said he had asked Information Minister Datuk Mohamed Rahmat to take steps to resolve the matter before Prime Minister Datuk Seri Dr Mahathir Mohamad's return from his vacation overseas on Thursday.

Prolonging the M. Nasir controversy would not benefit anyone and the best way to resolve it was to hear from the artiste himself so that a fair decision could be made, he said in his office, here, today.

He hoped that the incident would serve as a lesson to the artistes in the country to avoid behaviour that could tarnish their image because they had their own influence and following.

Earlier, M.Nasir met Information Ministry Secretary-General Datuk Zawawi Mahmuddin to discuss an alleged remark by the artiste belittling the Prime Minister which led to a ban on his songs and films by RTM.

Zawawi said he was instructed to look into the case but it is left to the minister to decide whether or not to review the ban on M. Nasir's works.

Asked whether he believed the decision to be made by the ministry would please all the parties concerned, he said: "It is difficult for me to speculate. My duty was to meet M. Nasir and then report to the minister."

Regarding the way the investigation was carried out into the allegation against the artiste, he said the ministry has its own ways of checking to find out whether M. Nasir spoke the truth or otherwise.

The ministry banned the airing of M. Nasir's works on official radio and television two weeks ago after a newspaper alleged he belittled the Prime Minister at a rehearsal for a poetry recitation in April.

Meanwhile, M. Nasir declined to comment on his meeting with Zawawi. --BERNAMA