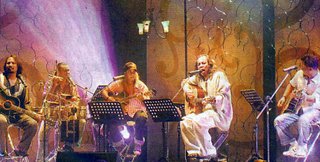 Personality: Music in his veins

He is a doyen in the local music scene and an interview with M. Nasir can be a disconcerting experience, writes INTAN MAIZURA.

WHEN I walk into his simple office at Luncai Emas in Sungai Buloh, Selangor, the sight of his back greets me. He gives a curt "where are you from?" but he doesn't turn around. Instead, the 49-year-old M. Nasir is more interested in tidying up the books on his shelf while humming some unrecognisable tune.

After what seems like painful minutes, the sifu finally turns around and throws me a sceptical look. "Nak apa? (What do you want?)" he asks, by way of introduction.

"Just a few questions, and I'll be on my way," I reply, determined not to let him unsettle me.

Fixing me with a bemused look, he settles down on the chair opposite me and tells me to proceed.

"Are you always so moody? Do you enjoy making people feel uncomfortable? Don't you ever smile?" I start, like a bullet, thinking at the same time that he's probably going to boot me out any second now. 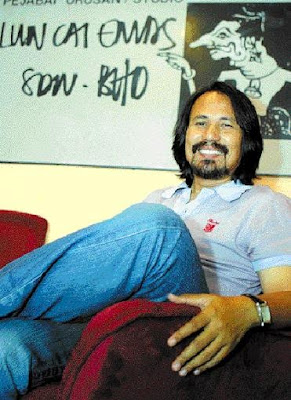 Suddenly, and to my surprise, the great M. Nasir throws back his head and lets out a booming laugh. His face no longer looking so stern, he asks: "Siapa kata I tak senyum? (Who says I don't smile?) See, I'm smiling now, especially when you ask questions like that!"

His reputation as a reluctant and reclusive star is legendary, I point out. "Let's just say I don't enjoy media intrusion especially when all they're concerned about is sensation. There are more important things to focus on."

Like his music, for example. "Yes, I prefer my music to speak for itself. I also think that my background or upbringing has a lot to do with it. I come from a background of fine arts, and where religion played an important part. I have my own philosophy on life.

"I'm basically an idealist and when I do something there has to be that element of honesty. I can't stand pretense or the sort of world where pretense is the norm."

It's his attitude that is the secret to his longevity. In an industry that can be described as fickle, his 25 years as a songwriter, recording artiste and producer is an amazing feat. And he's able to remain fresh throughout.

"It's not everybody who can do what I do for a long period," he says, nonchalantly. "I still get excited when I create something. I recognise that audiences do grow up and their appetites change.

"Whenever I hit a new tune or go into the studio, I forget that I'm tired. Sometimes 'magic' is created and I think, 'yeah!' I think every one has it in them to create that magic but do they? That's the only way to stay in the industry. I mean excitement doesn't come every day, of course, - there are ups and downs."

He adds: "Actually there's no secret to longevity - everybody should know what is. You just have to strive for the best and be able to touch your audience in a big way.

"If you are just a singer, maybe your shelf life is not so long. But for me, because I sing my own songs, I produce, I write the lyrics, both for myself and others, my name will always be there. In fact, I've never left the scene.

"You must also be a pacesetter, not simply a follower. Always be aware of the music scene around the world too because that's the only way you can make changes. It's easy to be trapped in your golden 'era' - the time when all your songs were hits - and then you continue to do things the same way. You'll never survive," says the father of six.

His latest outing of six months is Sang Pencinta - an album that the Cancerian describes as a slight departure from his usual stuff.

"It's pop. It's different in the way it has been composed - it's more moderate, with greater emphasis on the melody and lyrics. I'm not saying it's better, just simply a change from before."

Apart from that, he's also producing stuff for other singers and is the current brand ambassador for Perodua MyVi, a car whose down-to-earth attributes, he says, does bear some similarities to his character.

There are also those rumours about a film collaboration with SMS king, Mawi, which he does not deny. "Still early days," he quickly dismisses.

Singaporean-born M. Nasir grew up aspiring to be an inventor. "I was excited over anything to do with creativity," he recalls. There were nine in his family - he was the fourth. "My father was a fireman and we grew up in a working-class society."

His musical inclinations he attributes to his older brother. "My big brother used to buy lots of albums. So whatever he bought I listened. He bought a guitar and I learnt to play it. He bought a turntable to play songs which we listened to on vinyl records.

"There were all these serious stuff, the big albums and I listened to all these big songs - all the great songs of the era.

"I became influenced by these great artistes, and I became an idealist because of them. They were the best. I wanted to be like them. It wasn't for me to think small. I wanted to think world."

When he started considering music seriously as a career, he cannot remember. "I entered the field of fine arts first. I studied at Singapore's Nanyang School of Fine Arts after completing school and then I taught to survive.

"Later, I started mixing with dramatists, musicians, composers, and band boys of that time. When I began to understand more about the world of music I realised that I wanted to make music."

Today, M. Nasir, who cites travelling the world as another passion, has work presented to him every day.

But if there's something he would love to do, and that's films. "It's the last bastion, as far as I'm concerned," he says. "Actually, I've made a lot of films although people only think of me as a composer."

He adds: "I want to produce or direct, or maybe even have a small acting part. I want to make my kind of film but the local scenery is full of challenges between commercial and artistic films; that's why it's taken me time to put it together."

But he has been working on some storylines. They are all about his thoughts - his stories, but the great man is keeping mum for now. Suffice to say, it'll be something to look forward to.
Dimasuk ke arkib oleh Saudagar Mimpi pada 7:56 PTG Tiada ulasan:
E-melkan IniBlogThis!Kongsi ke TwitterKongsi ke FacebookKongsi ke Pinterest
Labels: Temu bual 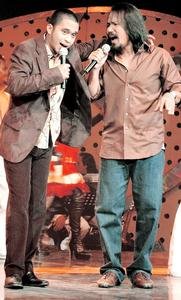