KUALA LUMPUR: Competing to drop the next viral hit song via social media seems to be the craze by newer singers and composers in recent times, to the extent that the more “traditional” composers are feeling the heat.

Renowned singer-composer Datuk M. Nasir said this posed a mighty challenge for “traditional” composers who take time in coming out with songs which are more complex in terms of lyrics and music.

“Viral songs are all the rave right now and the older generation of composers are feeling affected when their songs are not getting the attention that they should.

“For example, the viral tune Pen Pineapple Apple Pen (by Japanese entertainer Kazuhiko Kosaka) is so easily accepted by the masses, somewhat affecting composers who go through the more traditional way in releasing their works,” he said.

M. Nasir said this when asked to comment on the challenges music composers face in creating works that would be widely accepted by the society.

Addictive beats and catchy lyrics may seem to be the formula for a viral hit song, but not everyone would chase after this kind of music, he said.

“It could get a little disappointing that these songs get the masses’ attention. Where does it leave the rest who actually take their craft seriously? They want to be heard too,” he said.

On that same note, M. Nasir added that the more “traditional” composers should instead learn to embrace modern technology and jump in on the ever-changing music trends.

“We can’t just sit back and ignore these music trends which are happening around us. To be relevant, change is a must,” he said when met at a press conference on his upcoming concert with Datuk Jamal Abdillah at Istana Budaya recently. 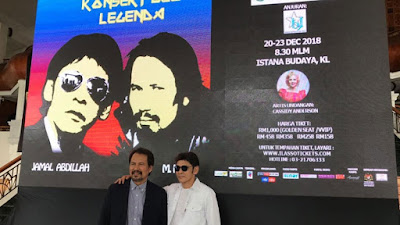