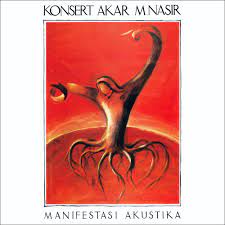 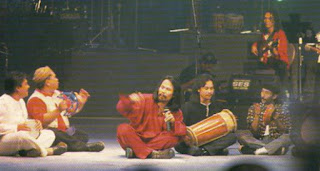 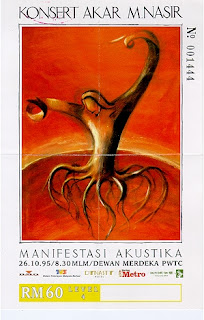 What some people do in a life time, M Nasir, does in five months

JULY, 1994: His album Canggung Mendonan is certified platinum, selling over 50,000 copies. He then defies the critics who call him "too ambitious" by staging a sold-out concert at Stadium Negara. In between, he produces Amy's debut solo album Magic.
AUGUST: EMI releases a double-album tribute to Nasir, titled Bunyi Yang Dilihat. It's a compilation of some of his greatest hits written for other singers, including Sudirman, Sharifah Aini, Seha, Ekamantra and Roy. Another sold-out concert at UKM follows.
SEPTEMBER: He participates in the ill-attended Malam Karyawan Malaysia, a charity concert in aid of Bosnia. He then criticises the music industry at a press conference, accusing songwriters of being lazy and composing standard fluff.
OCTOBER: He rests.
NOVEMBER: His July concert, Canggung, is aired on TV, he gives an interview to a Singaporean tabloid and Canggung Mendonan breaks the 80,000 mark.
DECEMBER: He wins TV3's annual Juara Lagu competition with Tanya Sama Itu Hud Hud. He also graduates with a diploma of fine arts and becomes a painter.

If all of M. Nasir's work and musical endeavours were to be documented, it would be some book. He is our very own pop and rock philosopher, writing, literally, hundreds of hits for himself and others. He has to this date been involved in 50 albums. "Writing songs is a spiritual thing," Nasir explains with his usual calm.

He started writing in the early 70s when he was paid a mere RM50 per song. The rate has since risen and he also commands royalties, but not an awful lot. This still isn't America, but it's not "just a living" with Nasir either. It seems to be more of a passion. He learned to play the guitar at the age of 10. "It was my brother's guitar. He also studied a bit of piano, bought all the records, that's how I got influenced. I was into folk and pop music. I was exposed to all kinds of music and I really like them all."

"I was not interested in playing music just as an instrumentalist," he points out. "I loved music in general and I wanted to write it." So he did. He wrote a couple of songs for the Alleycats but it was Sweet Charity who gave Nasir his first recorded song, Bertemu Dan Berpisah. "I wrote it in half an hour - music first, lyrics later." Elaborating on his relationship with Ramli Sarip, then the lead singer of Sweet Charity, Nasir seems to speak of him with respect. "Ramli and I lived in the same place. He made it in music first, I was trying to be a footballer. I even wanted to be a golfer because I was a caddie. Ramli's a rock n' roller. Always rock 'n' roll based."

Nasir's contribution to Sweet Charity's album is particularly important since the group recorded the first rock album. Of course, there were other rock acts like Black Dog Bone hanging around but "they did not how to push distortion," says Nasir. "We listened to rock in the 70s. It took more than 10 years to reach the country.'-'

M. Nasir is one of the most important figures in the history of Malaysian music: He was responsible for refining and texturing pop-rock music. "When we started, we never listened to combo bands, big bands. We hated all trumpet playing bands. Rock was considered underground then. The mainstream was Ahmad Nawab." What is ironic of Nasir and Ramli's involvement in confirming our musical roots is that they are both from Singapore. "Singapore was the entertainment centre of this region, the film industry and music. I once represented Malaysia when I was still Singaporean."

Of course, when the music industry was at its infant stage, no one spoke about royalties. Nasir initially accepted whatever he was given. "I was so enthusiastic about my first album that it didn't matter. I think I got some royalties - six percent divide by two minus 10 percent, or something like that. I was the earliest to get proper royalties." Writing original songs wasn't encouraged either. "The industry was not sure of our local talents. I have done producer jobs for RM400. I never felt it was too little. It was just the situation."

It's clear that money wasn't the motivating factor since Nasir continued to write regardless. Today he has a huge body of work to look back on, or maybe not. I don't really like reminiscing. There is no favourite song of mine. I always think the next one will be better. Maybe the next one will be a masterpiece." Maybe it's all in the method in which he composes. "I just let the tape go and I just write. A song takes me half an hour, two, three days max."

He claims he never gets "writer's block" because his interests vary. He terms alternative music today as a "subterranean thing" rather than a career. "I have a certain attitude," he admits. "I couldn't care less about a hit song. I think it's a job which sometimes I don't like and sometimes I like. When I don't enjoy it is when I know a song is not going to happen, spiritually or financially."

So what are the songs he wishes he had written? "Many. Most of the Beatles songs, even Procol Harum. Some classical, Middle Eastern, some P. Ramlee." If he has one thing about modern music to gripe about, Jackson is his target. "Michael's stuff is a rip-off. Just production." Music is music nonetheless. "Most writers have a sense of beauty and niceness although their lifestyles can be questionable," Nasir says. "It's a sense of simplicity._I started with a sense of poetry but I guess songwriting is a lesser poetry."

M. Nasir has always had strong folk appeal in his music and this is not without reason. "I believe all musicians must know the folk root. I feel it's the basis of music. I follow all the latest genres but I still love the blues and folk. Folk has become (he pauses)... not so ethnic. It's like (he pauses again)... James Last type music. What's the word for it?"
Dimasuk ke arkib oleh Saudagar Mimpi pada 7:37 PG Tiada ulasan:
E-melkan IniBlogThis!Kongsi ke TwitterKongsi ke FacebookKongsi ke Pinterest
Labels: Temu bual 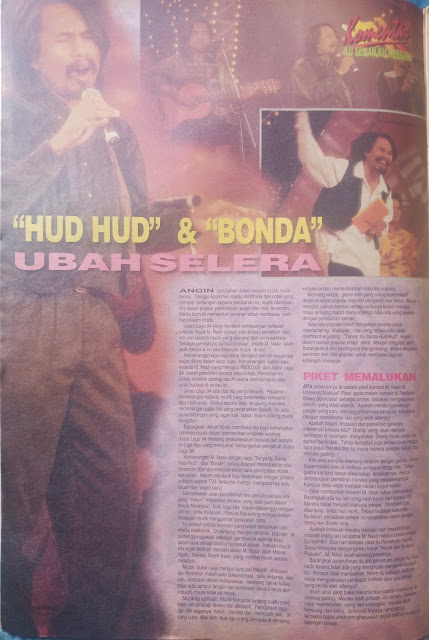 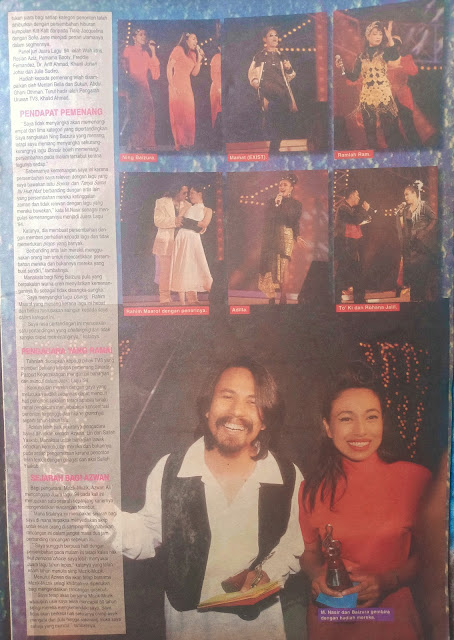