Nasir gives his music an identity

taken from undated The Star newspaper
By Azhariah Kamin 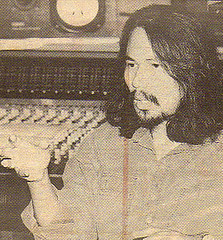 Talented and controversial singer/actor/composer M.Nasir is in the midst of producing his third solo album Canggung Mendelan with BMG Pacific.
The extraordinary musician, one of the country's most prolific producers/composer, has worked with numerous artistes which include Search, Wings, Jamal Abdilah, and Rahim Maarof, to name a few.

And when it come to his own work, Nasir likes to include a traditional touch because he feels that traditional music is the mirror of the people. Hence his latest album not only features several traditional instruments but also tunes which are strikingly asli in arrangement.

A sneak preview at his own studio, Ronggeng, recently revealed that his new album follows that him new album follows the musical theme of his previous efforts, Mustika and Saudagar Mimpi,both of which featured modern and ethnic music.
One of the song on this album, Mentera Semerah Padi features the serunai in the intro before leading to some kompang sounds.lt should captivate those who listen for something different in local music.

Besides serunai and kompang, Nasir has also included other ethnic musical instruments such as seruling, gendang, rebab , gong, sqpe and accordion, “to make the music richer”.

He hopes to make Malaysian music easily identifiable, like ethnic music, so that it can be accepted internationally, he explained.

Nasir, who admitted to writting all sorts of things (yes, even silly love songs) said this album, like Saudagar Mimpi, is serious and at times, even satirical.
Canggung Mendelan has a contemporary yet Malaysian concept. Every song tells a story which speak of hopeless world and at the same time gives advice.
One of the problems Nasir faced with Canggung Mendelan was recording with the ethnic musical instruments.

There's a difference between playing ethnic musical instruments live and recording them in the studio, he explained.

“It sounds great when you're performing live but it's different when you try to record it in the studio. Sometimes you fail to get the original sound.
“This is when you need good sound engineers and technicians and also sophisticated equipment, ” said Nasir.

This time he has turned to Australian engineers to ensure once again that the album has ground-breaking sound.

“Their (the Australian) studio are equipped with more advanced and sophisticated facilities compared to what we have here, said Nasir.
Still surprisingly modest despite the award, critical acclaim, hits and respect he has accumulated over more than 12 years, Nasir has formed his own views about what makes a good album.

“For me, a good album is one which is able to portray the maximum level of one creativity.

“We can't deny that the commercial aspect is important - you can find that in other singers album i have produced.