Music maestro Datuk M. Nasir proved that he is in a class of his own at his recent concert with the MPO, writes Nur Aqidah Azizi 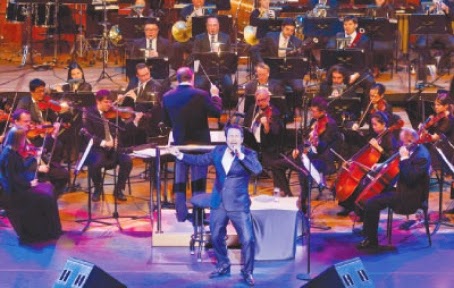 Nasir showcased an energetic performance at the concert
HIS voice can be softly caressing or hard-hitting like a cannonball, but whatever it is there’s no doubt that music maestro Datuk M. Nasir is in a class of his own.

By the end of his two-hour performance with the Malaysian Philharmonic Orchestra titled M. Nasir And The MPO recently, M. Nasir proved that he’s still a force to be reckoned with. He had put together  a tightly entertaining show, backed by great musicians from the MPO led by Kevin Field.

It was the first collaboration between M. Nasir and MPO, and the two-night show, which began the night before proved to be a worthy effort.

Andalusia, the Best Song in Anugerah Juara Lagu 1999, was the opening number with a salvo of explosive rhythms in new arrangements, that fused classical and doses of Middle-Eastern sounds. It delivered a totally new experience for the audience.

M. Nasir’s voice soared and together with the MPO, the opening was spectacular, in every sense of the word.

He kept the momentum with Kias Fansuri, a number he composed with lyrics written by the late Loloq, and the new arrangement too was done by Syed Sharir Faisal Syed Hussain.

“The next song that I’m going to perform is a song that I like... because I composed it,” said M. Nasir to the audience in the packed hall who roared in laughter (he wrote all the songs performed that night). And it was fruitful.

Ironically enough, M. Nasir picked the heart-wrenching Keroncong Untuk Ana, which the singer performed full of emotion, reducing some of the fans to tears. The captivating sound of the violin and M. Nasir’s wistful delivery made the performance even more noteworthy.

He then launched into Mustika, a romantic evergreen tune which has been rearranged by Luqman Abdul Aziz. Fans clearly enjoyed the new arrangement as they sang along to the tune.

Bonda, one of the hits taken from Nasir’s fifth album Canggung Mendonan and then Kepadamu Kekasih followed.

The tempo of the night was turned up with Apokalips and a more recent tune, Juwita Citra Terindah.

M. Nasir not only showcased his dancing skills when performing the latter tune, but he also teased some of his female fans — a rare thing from this usually no-nonsense music composer and singer.

“I had dreamt of becoming a dancer and actor, but luck was not on my side... I become an M. Nasir instead,” said the singer who seemed surprised to see fans giving him a standing ovation, after that casual remark which he probably had meant as a joke.

The second segment of the night began with Hati Emas, a popular hit from Kembara, the group which M. Nasir led  before pursuing his solo career.

It was a vigorous performance from the singer, who turned 55 earlier this month. It was impossible to overlook his passion for the music.

Fans loved his energetic vibe and M. Nasir in return, loved the crowd’s response. Once in a while, he took time to shake hands with fans near the stage and that was a lovely gesture.

The ambience of the hall took a different turn as the slow and evergreen tune Suatu Masa filled the hall. Once again, fans were touched by M. Nasir’s delivery of the song, which was dripped with emotion.

But M. Nasir was quick to shift the mood with his next numbers which included Sahabat Gua, Raikan Cinta and the ever popular Mentera Semerah Padi.

And just when the crowd thought the night was over, M. Nasir came back with a smile on his face, enchanting the fans with the affectionate Sentuhan Listrikmu.

But that wasn’t all. He sang the festive-tune Ada to conclude the night.
M. Nasir had never looked so content and as he took his last bow and bid goodnight to the fans. The singer was beaming with satisfaction as all fans stood up to the tune of Ada and danced the night away.
The night reflected Nasir’s 35 years of music legacy and watching him perform through the two hours of classics was a clear reminder of his living legacy.
Dimasuk ke arkib oleh Saudagar Mimpi pada 2:39 PTG
E-melkan IniBlogThis!Kongsi ke TwitterKongsi ke FacebookKongsi ke Pinterest
Labels: Konsert, Malaysian Philharmonic Orchestra (MPO)