taken from The Star 11 July 2012 By N. RAMA LOHAN
entertainment@thestar.com.my


It’s still fairly new territory but Nusantara legend M. Nasir is rubbing his hands with glee for his collaboration with the Malaysian Philharmonic Orchestra.

HE may come from the generation of fans who was privy to the age of musical exploration – the 1960s, when musical styles first began to mesh in tune – and listened to Deep Purple’s Concerto For Group And Orchestra, and seen albums like Metallica’s S&M and Scorpions’ A Moment Of Glory infiltrate popular music in the last two decades – but Datuk M. Nasir’s collaboration with the Malaysian Philharmonic Orchestra (MPO) is just like what the man says it is: “It’s just me playing with an orchestra.”

The freshly-turned 55-year-old (his birthday was on July 3) rarely overstates his ambitions, and it’s no surprise that he sees the shows on July 13 and 14, aptly titled M Nasir & The MPO, as merely another bunch of performances, but ones he’s pretty thrilled about, given the setup. Like the albums by the rock giants of the West, his close encounter of an orchestral kind at Dewan Filharmonik Petronas (DFP) is expected to turn heads.

During a recent interview, the singer/songwriter/actor admitted that some of his music inherently possesses a symphonic quality. “I’m not sure how this will all sound, but I’m looking forward to it. This is a great and beautiful opportunity for me,” he enthused, revealing that this would be a chance for his fans to see him in a unique setting. 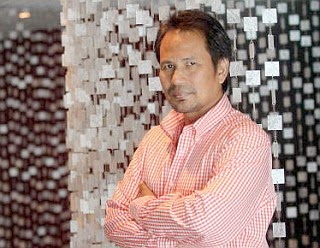 Risky business: Music icon M. Nasir is explicitly aware that his collaboration with MPO is a gamble, but it’s still one he is relishing.

Nasir is the third in a sequence of legendary local artistes who have plied this route, Tan Sri SM Salim being the first to work with the MPO in 2001, followed by Datuk Sheila Majid two years ago. “I don’t really know the criteria for the selection of artistes, but I’m glad I’ve been chosen,” he shared of his gig, adding that the idea was not his. He acknowledges that while the quality control at DFP is very high, it bodes well to see the hall opening its doors to a wider palette of music.

While East-meets-West endeavours have proliferated for decades now, it has continually attracted its detractors. Certain quarters believe the inclusion of an orchestra into the repertoire would desecrate the sanctity of the Nusantara fundamentals of his music. Nasir, though, is single minded that this is not a case of two separate entities being forced together. Rather, it is a fusion of two musical styles from the ground up.

“The challenge is to make this work. It’s not a case of me plus the orchestra, but a process where the music is arranged as a symphony. I’ve worked with the MPO before, but not in this capacity. Not many people have had the chance to experience something like this, so it will be up to us to make the audience like it,” he explained, adding that the orchestra setup apart, the 100-plus member ensemble will also include two musicians playing the Malay drums and flute, respectively.

MPO Associate Conductor, Briton Kevin Field, who also helmed Sheila’s performance, leads the MPO for Nasir’s show. Purists have questioned his credentials in interpreting music that’s not native to him. Nasir is explicitly aware that the professional environment in which classical musicians operate will see Field sailing through his “assignment”. “They (classical musicians) read music, what could be the problem?” noted the former Kembara man with a laugh.

And when pressed to explain how Nusantara melodies would be evoked from a violin, for instance, the music legend put things into sharp focus: “The instruments make the melodies. It doesn’t really matter whether they’re traditional or otherwise.” But he does admit to being clueless as to who the audience would be for a show of this nature, conceding that they would probably be fans of his music.

Speaking of his music, the 20-odd songs expected to get the roll call for the two-hour shows include gems like Kias Fansuri, Sahabat Gua, Apokalips, Juwita, Ghazal Untuk Rabiah, Andalusia, Bonda, Keroncong Untuk Ana and Mentera Semerah Padi. The choice of song was not only of Nasir’s own preference, but also based on general consensus.

Despite it being a show at DFP with the MPO, he doesn’t view this set of shows as any more prestigious than his other shows. “The only difference is in the sound and tone.”

It’s a common place for shows of this persuasion to include guest artistes, but the singer was quick to pour cold water on any such speculation. “This is my adventure, so there are no collaborations – no surprises,” he said of the shows, which might make it into a DVD.

Nasir’s 35 years in the music industry has seen him scale some lofty heights. The multi-talented artiste, who has a keen love for painting, received his Diploma in Western Painting at Singapore’s Nanyang Academy Of Fine Arts in 1978. He then went on to lead his band Kembara through four albums in the 1980s before striking it out on his own with the cheekily titled Solo album in 1989. To date, he has seven solo albums tucked under his belt and has also produced albums for numerous artistes.

He is philosophical of his successes though. “I never dwell on the past. I get up everyday and think how I can make something better than the last thing I did.” It’s this forward-thinking psyche that has taken Nasir places, likewise his risk-taking nature, which he insists has served him well in career and life.

Nasir’s involvement in the music industry for more than three decades has accorded him the clout to call a spade a spade, but he sees the condition of the Malaysian music scene as nothing more than a mirror of global developments. “There hasn’t been a significant movement in a while, not since the days of alternative rock in the 1990s ... there’s just nothing that’s really making an impact. We’ve lost a sense of idealism. There are no more full albums here, or concept albums that are trying to say something. Music is only for the youth,” he lamented, agreeing that music marketing has changed for the better in the way people listen to music, what with ring tones and downloadable music.

But for the industry to get back on an upward scale, he reckons artistes should never stop trying to push the envelope, just like he has all these years.

And realising this orchestral excursion, is the proof of the pudding.