taken from NST 13 July 2012
Only the third local artiste to be given the honour to perform at Dewan Filharmonik Petronas, M. Nasir promises a performance unlike any in his 35-year career, writes Hizreen Kamal 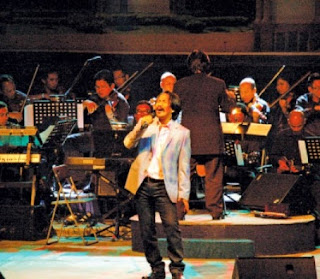 HE has shaped and influenced the local music scene for the past 35 years, sealing his status as a well-respected music maestro.
The music fraternity calls him Sifu (master), a title that comes with big responsibilities and expectations. Clearly, the renowned singer and composer Datuk M. Nasir who just turned 55 last week, has survived the test of time.
He boasts an endless list of hits to his name, sell-out and notable solo concerts like Konsert Canggung at Stadium Negara (1994), Konsert Akar at Putra World Trade Centre (1995) and Konsert Alam Muzik at Istana Budaya (2009), besides garnering a string of industry awards.
Beginning from his early days as part of the group, Kembara, in the early ‘80s (which saw the release of five albums namely Kembara, Perjuangan, Generasiku and Seniman Jalanan), he embarked on a solo career in 1989 with the launch of his debut album aptly titled Solo.
He then went on to release six successful albums (Solo, Saudagar Mimpi, Canggung Mendonan, Srikandi Cintaku, Phoenix Bangkit and Sang Pencinta), besides composing songs and producing albums for artistes such as the Alleycats, Rahim Maarof, Search, Wings, Hattan, Misha Omar and Jamal Abdillah, turning them into a music force to be reckoned with.
His compositions include Hingga Akhir Nanti (Alleycats), Fantasia Bulan Madu (Search) and Sejati (Wings) as well as Mustika, Mentera Semerah Padi, Juwita Cinta Terindah and Tanya Sama Itu Hud Hud.
With his laid-back, no-nonsense attitude, the entertainer — known for his trademark rugged looks (although he’s chopped off his long Bohemian-esque locks) — continues to remain relevant to this day with a huge fan base cutting across all ages and backgrounds.

YOUNG ACTS
Awan Nano, M. Nasir’s recent composition for Akademi Fantasia (AF) 7 champion Hafiz followed his 2005 stint as AF Season 3 principal and subsequent collaboration with the show’s winner Mawi  on Aduh Saliha. It shows the process of change that he has undertaken, which received the support of fans old and young.
“Honestly, I enjoy working with new acts. I like changes that come with disciplines. For example, an artiste who was big in the ‘80s with many hits, should be enjoyed by those of that era. Things won’t change even if I come out with a song for that particular artiste. People would still want to hear the artiste’s old hits that made him big in the first place.
“We have to move with the times. For example, classical music is not everyone’s cup of tea,” he says.
As owner of production and publishing house as well as recording studio Luncai Emas, he also dabbled in film production in 1997 with the movie Merah.
M. Nasir can now look back on all his achievements with a satisfied smile but he feels he still has a long way to go before he truly leaves an indelible mark in the industry.

BIGGEST ACHIEVEMENT
Ask him what he considers his greatest achievement so far, and you’ll find him struggling for an answer. Instead, M. Nasir has this to say: “Every day I wake up and think about ways to create something better and different to benefit the industry.”
A man of few words, he  takes his time before answering my questions. Going by his answers, everything he has done throughout his career seemed effortless.
“Music has been my passion from the beginning and one thing which I enjoyed was taking risks in all my projects. These included live performances as well as recording tracks in the studio,” he says.
“I am very spontaneous by nature and when I feel like I need to do something, I just do it. So far, many of my attempts at spontaneity have been fruitful.”
Things, however, didn’t always turn out the way he’d expected.   “You just have to pick yourself up and move on. There is always another song and another performance to work on. Experiences, good or bad, help make you a better person,” he adds.

LIVING LEGEND
Although M. Nasir may have done it all, there is one  thing that he has always wanted to take on but never had the opportunity to do so. Well, not until now.
Tonight and tomorrow night, he is embarking on his first collaboration with the Malaysian Philharmonic Orchestra (MPO).
Aptly titled M. Nasir And The MPO, it is the most awaited showcase to conclude Dewan Filharmonik Petronas’ (DFP) 11/12 season.
The concert, to be held at the DFP at 8.30pm, will see M. Nasir performing more than 20 of his most popular and evergreen hit songs throughout his career, which have made him a living legend.
The 90-minute performance will be led by MPO associate conductor Kevin Field.
The audience will be treated to MPO’s interpretations of Kias Fansuri, Sahabat Gua, Apokalips, Juwita, Ghazal Untuk Rabiah, Andalusia, Bonda, Kepadamu Kekasih, Sentuhan Listrikmu, Ada, Di Balik Cermin Mimpi, Hati Emas, Keroncong Untuk Ana, Mentera Semerah Padi, Mustika, Raikan Cinta and Suatu Masa, among others.
The songs have been given new arrangements by Ahmad Muriz Che Rose, Vivian Chua, Datuk Mokhzani Ismail, Luqman Abdul Aziz, Ruslan Mohd Imam, Loo Shu Chin, Leonard Yeap Lin Soon and Syed Sharir Faisal Syed Hussain.
The other two artistes who have performed on the DFP stage include traditional singer Tan Sri SM Salim (2001) and R&B/pop entertainer Datuk Sheila Majid (2010).
M. Nasir says:  “This is nothing like any of my previous solo concerts. The interpretation is sure to be different from  the original and the audience will enjoy the lush and grandeur sounds by the MPO. I think my fans have been waiting for this collaboration with bated breath and they will see me performing without electric musical instruments.
“Since my music features Malay drums, I’ve been given the go-ahead to bring in Malay drummers. There will be traditional instruments like rebana, gendang, percussion and flute.”
Collaborating with a symphony orchestra has its challenges.
“It can be a little overwhelming for some but it is a challenge that I am eager to take,” he says.
“This collaboration is a benchmark in my career. I’d like to achieve a certain standard of performance especially after performing for 35 years and this may just be it. What I can say is that audience will see a different  M. Nasir,” he says, adding that his nerves are already “acting out” and he is feeling the gush of excitement to perform at a venue specially designed for acoustics performances.
When asked which of his compositions he considers his masterpiece, he says: “I don’t know. There isn’t one I’d consider perfect. Every song has its flaws. But I felt really good when I composed Fantasia Bulan Madu. It just  happened spontaneously and if you noticed, it did not have a proper intro. Who knew it was going to be a hit!”
Next year, he has plans for a nationwide tour which will include Singapore.

BIG SCREEN BECKONS
Having starred in the 1986 musical drama Kembara Seniman Jalanan (which he co-wrote) directed by Nasir Jani, M. Nasir plans to get more actively involved in films within the next five years. This time, he will remain behind the camera as a producer.
A fan of Francis Ford Coppola’s Godfather trilogy (he only counts I and II as his favourites though), he was last seen as the wizardry Tasik Chini elder in the musical comedy Magika. In the past he had played a wide range of roles — from a romantic leading man (Selubung) to a legendary warrior (Puteri Gunung Ledang) as well as smaller parts in Fenomena, Balada, Simfoni Duniaku and Merah.
These days, M. Nasir says, he is more picky  about his roles. He says: “I want to play a character with a strong purpose in a story, one who will leave a mark in the plot development.”