taken from The Star 2 January 2002
By MUMTAJ BEGUM
Pictures by A. MALEX YAHYA

THIS year’s Juara Lagu has to be one of the most memorable musical events thanks to TV3’s initiative to rediscover Malaysia’s own rich music. For the past 15 years, viewers and audiences had to put up with falsified Malaysian music and dance routines, which showed the heavy influence of the West. However, for Juara Lagu 2001 held last Sunday, the station opted to start the show with a bang, using various traditional percussion instruments like kompang, rebana, tabla and Chinese drums which seemingly tried to outdo each other yet beating in unison and coming together so harmoniously. After all, the theme for this year is The Best of Malaysia to the World.

In that sense, it is not surprising when the performances for a new category, Ethnic Creative, had the most extensive stage sets. Nora chose a village setting for her song Desa Tercinta and even cycled onstage much to the audience’s glee. Siti Nurhaliza delivered Ya Maulai amidst a wayang kulit background. The four songs featured in this category were equally good and definitely on a higher platform than the songs featured in the other two categories, Pop Rock and Ballad.

And apt enough, it was Yasin’s Mimpi Laila which won the Juara Lagu 2001 award (a trophy and RM25,000). Composed by the singer, the song which meshes Arabic and Malay music was also adjudged the Best Song in the Ethnic Creative category (a trophy and RM12,000). 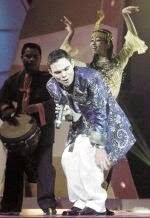 Although Mimpi Laila is undoubtedly a good song, its musical arrangement is not on a par with M. Nasir’s Raikan Cinta, another finalist in the same category. It is disappointing to note that Nasir, who had won the Juara Lagu award twice before, walked away empty-handed despite giving the most unpretentious performance of the night. The well-established musician was backed by just four musicians as opposed to having over-dressed and ostentatious back-up dancers favoured by other singers.

Nevertheless, Yasin emerged as a promising star to continue along the path set by Nasir – highlighting our own heritage in the popular music scene. Yasin, who named Nasir as one of his idols, has good vocal prowess that comes off sounding quite like Nasir’s. While Nasir is inclined to be eccentric when it comes to costumes, Yasin did not go for anything elaborate.

Mimpi Laila came to be after Yasin fell asleep reading the 1001 Arabian Nights. Said Yasin: “I don’t really know why it won, but I think a song that comes from the heart can easily touch others as well.” Not expecting to win, he attributed his victory to rezeki (good fortune) and fate.

Ah yes, but what of “princess” Siti Nurhaliza then, who had a song in each category – Pop Rock, Ballad and Ethnic Creative? Although her costumes were a tad too showy and not colour-coordinated, the young singer demonstrated a new side. For Ya Maulai and Engkau Bagaikan Permata, she executed some simple but effective dance moves. So appealing was her idea of using people from three generations – children, youth and elderly folk – in Ya Maulai that she won the Best Performance trophy and RM10,000.

“I thank the pakcik-pakcik because they are the reason I received this award,” said a modest Siti after the show.

Siti was ecstatic to have clinched the best song in the Pop Rock category – a category that has eluded her before. Besides singing the tune composed by Helen Yap, Siti also co-wrote the lyrics for Engkau Bagaikan Permata with Sham Amir. What’s more, during the performance she played the snare drums accompanied by Steve Thornton’s percussion unit, Aseana. Now does she know how to impress the already-enamoured fans or what? 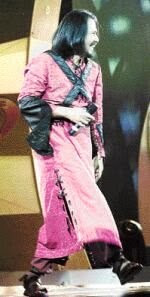 M.Nasir walks away empty-handed this year. Could it be his dressing?

Another winner was Dayang Nurfaizah who made it to the Juara Lagu finals for the first time. She performed two songs and her effort was rewarded when Seandainya Masih Ada Cinta, composed by Ajai and Syde ENV, won the best song in the Ballad category.

While our artistes have powerful vocals, they seem to lack a good sense of dressing. Take the beautiful Nora, for example, who spoilt it by wearing a lime green outfit that had strings attached at the top half during the song, Menyemai Cinta Bersamamu. This came after her picture-perfect style of a traditional baju for the Desa Tercinta number.

Which brings us to the question why performers in the Pop Rock category wore gowns instead of our own elegant traditional costumes? The obvious reason would be because this category does not originate from Malaysia and requires the “foreign” look.

And if one traces the growth of this genre in the local music scene, it’s evident that there hasn’t been any. It has been static for the past two-and-a-half decades. Most jarring was Def-Gab-C’s Marilah Maria. Personally, it’s a wonder how that song even made it to the finals because it was just loud and featured a “safe” (read: nothing new) musical arrangement. So what is supposed to be the most electrifying genre elsewhere turned into one of the hardest types to sit through.

It’s no wonder then that the jury almost always prefer ballads. But with ethnic creative coming off as a big victor this year, it is perhaps an indication that we have more to offer to a world that is already saturated with recycled pop music from the West.

Juara Lagu was broadcast live over TV3, on the net (juaralagutv3.time.net.my) and on THR (99.3FM).