Returning to Istana Budaya once again, M. Nasir had his adoring fans grooving to the beat, writes Aref Omar 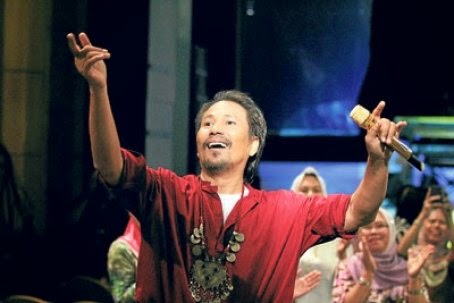 LOOKING younger than his age, consummate performer Datuk M. Nasir, 55, easily showed the army of fans who turned up for his concert at Istana Budaya how to have a good time.

It’s not everyday that the audience gets to stand up and joget in the majestic hall to the evergreen tunes of the man dubbed sifu for his longstanding musical endeavours.

Initially hesitant, the mixed crowd warmed up to his beguiling charms, clapped and sang along at his request before getting up to move to the infectious grooves by the second half of his show.

M. Nasir even walked off the stage to sing amidst the dancing crowd and to shake hands with his appreciative fans, who didn’t hesitate to tell him how much they love him.

Following his last concert here four years ago, the poet, songwriter, composer, producer, actor and film director pushed it up a notch with his latest Konsert Sang Pencinta which featured some theatrical elements that added to the revelry.

After starting with an instrumental song Cermin Mimpi, accompanied by a visual feast of surreal CGI images projected onto a special screen that encapsulated the stage, a masked troupe of young performers dressed in white recited the poem Aku by Chairil Anwar.

A silhouette behind the curtain  heralded the start of the two-hour show, which kicked into high gear when the lights came on.

The curtain lifted to reveal M. Nasir, who then sang his set of 25 tunes in perfect form — most of which were signature numbers that the audience screamed in delight as they heard the introductory strains being played.

From Dalam, Bahtera Raudah, Apokalips and Keroncong Untuk Ana, to Hidayah, Rajawali Terbang Tinggi, Perang Yang Lagi Satu and Hijab Kekasih, he clearly had the crowd in the palms of his hands.

Fully warmed up and enjoying the ride, they bopped along to his mesmerising rendition of  Mentera Semerah Padi. Backed by a large live band which included three backing vocalists, percussionists, the OSK (National Symphony Orchestra) string section and the OTM (Malaysian Traditional Orchestra) gamelan ensemble, his set of songs were given a fresh feel with new arrangements.

M. Nasir, decked in a classy red Malay ensemble that looked like he had just stepped out of a period Hang Tuah set, worked the stage with graceful vigour — his moves reminiscent of silat stances and steps. He didn’t speak much in between songs, except to continuously thank the crowd for their support, preferring to let the show do all of the talking musically.

The acoustic set added another dimension to the show which kicked back into high gear when the full band performed Akar Kita, Buka Hatimu, Wadi, Mustika and Sahabat Gua, before ending with Ada.

By this time the crowd were already worked into a frenzy with loud chants of “we want more”.  M. Nasir obliged with an affecting rendition of Sesat di Kuala Lumpur,  followed by Sentuhan Listrikmu and Hati Emas.

The encore session came to an end with a reprise of Mentera Semerah Padi, that drew roaring applause  and a standing ovation no less.