It’s all about celebrating life in this year’s cancer awareness week organised by the National Cancer Society of Malaysia.

CELEBRATELIFE! is the theme of the National Cancer Society of Malaysia’s (NCSM) cancer awareness week this year and is aimed at dispelling the notion that the disease is a death sentence. Instead, individuals should empower themselves in the fight against cancer.

NCSM’ s executive director Dr Saunthari Somasundram says that the target groups they want to reach out to are young adults and children. 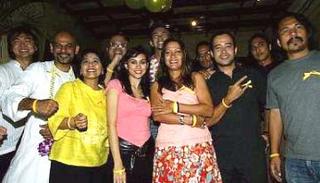 Some of the celebrities at the launch of the CelebrateLife! events.
“This is because we need to start cancer awareness from young because we want them to be pro-active about life and prevent themselves from getting the disease,’’ says Dr Saunthari.

“The problem is that most people do not feel the need to know about cancer. And they think it is a “fatalistic” disease. Dispelling this myth is the first step to cancer awareness,’’ she says.

Research shows that more and more young people are developing cancer now. This, says Dr Saunthari, could be due to the lifestyle and diet observed by them. Being inflicted with the disease younger also seems more prevalent among Asians than their Western counterparts because of the difference in demographics, she adds.

Recognising that reaching out to this group would prove to be a challenge because they need a positive spin to deliver the message across so that young people could identify with, the NCSM invited celebrities to be involved in the CelebrateLife! activities. Among these were thespian Edwin Sumun, 31, and jazz singer Izlyn Ramli, 30.

Those that came to show their support for other CelebrateLife! events this year, starting with the launch at Bar SaVanh in May, were M. Nasir, Yasmin Yusof and Chako Vadaketh.

“We needed a way to grab attention and involving celebrities was a way to do that because they have the influence and are role models for young people,’’ says Dr Saunthari.

Dr Saunthari sees this method as a more effective way of getting through to young adults because they would rather listen to a celebrity speak on cancer than to hear a clinical explanation by a doctor.

“We have had a good response from the celebrities since the start of the CelebrateLife! events. Those not directly involved still came to show their support, which is very encouraging,’’ says Dr Saunthari, adding that this is the first time the NCSM was using celebrities to promote cancer awareness.

As for the wrist bands that have been sold at RM5 each to promote cancer awareness, Dr Saunthari says that the response to the item has been overwhelming. The first 10,000 bands were sold within a month. Starting off with yellow, the bands also come in other colours.