In-Concert: Two of the best 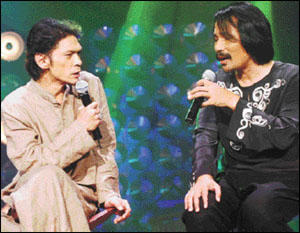 His flawless voice was well complemented with some serious silat movements in the song that celebrated the bravery of Malay warriors.

The recording of this show last Tuesday night to be aired by RTM sometime during the coming Hari Raya holidays, turned even more riotous the minute Jamal Abdillah took centrestage after Nasir’s number.

Looking fresh and charming as ever, the always slim charmer offered Seroja, a classic, delighting listeners with his trademark soulful voice and melancholic facial expressions. As expected, the audience turnout for this show featuring two of Malaysia’s best singing ‘otais’ was simply overwhelming, with some locked outside as all seats were taken.

Fortunately, the latecomers and die-hard fans – numbering almost a bus-load – were patient enough to wait and were allowed in by the security guards to watch the recording via a giant monitor placed outside the auditorium.

He proceeded with another of his compositions, Laila Namamu Teratas, recorded by Amy Search, and displayed his mastery of rock.

A lot more talkative now compared to his early years, Nasir joked that he was afraid to open his mouth as wide as Amy’s for fear of swallowing the flying bubbles cascading down from the ceiling blower – prompting laughter from the crowd.

His next song Ratnaku, recorded by singer Roy, saw Nasir swaying seductively to this uplifting number before launching into a head-banging routine – albeit a mild one – while rocking the house with Jaket Biru.

Renowned for his spiritual leanings evident in his compositions, Nasir’s mystical aura was evident when he sailed effortlessly through Hidayah which saw many in the audience pondering its religious references. Since it was a show meant for the Hari Raya break, Nasir obligingly reprised his famous festive tune, Suatu Hari Di Hari Raya where the entire hall sportingly sang along before he invited Jamal out again.

With Joe Wings on guitar, Jamal almost brought the house down with his own version of Gadis Melayu once recorded by singer Othman Hamzah.

He managed to tickle the audience with his awkward dancing style but at the same time had the women in the audience smiling.

Sparks started to fly in all directions when the two top crooners collaborated on Kepadamu Kekasih.

The excitement intensified further when the duo sang Ghazal Untuk Rabiah which they recorded for one of Jamal’s top selling albums.

Jamal wriggled his twig-like body in a frenzy while Nasir did his Nusantara moves which stirred the crowd mightily.

The magnificent duo wrapped up the entertaining show with Salam Aidilfitri and Salam Dunia, again creating laughter when Jamal showed off his zapin steps.

Since the crowd refused to disperse after the show ended, they were presented with an ‘encore’ in the form of a repeat of Kepadamu Kekasih.

The audience had no doubt that they had seen two of the best local singers who sang from the heart, and were more interested in complementing each other instead of trying to outdo one another.
Dimasuk ke arkib oleh Saudagar Mimpi pada 7:36 PTG
E-melkan IniBlogThis!Kongsi ke TwitterKongsi ke FacebookKongsi ke Pinterest
Labels: Konsert