'Grandmaster' M. Nasir to perform in S'pore for the first time in 25 years 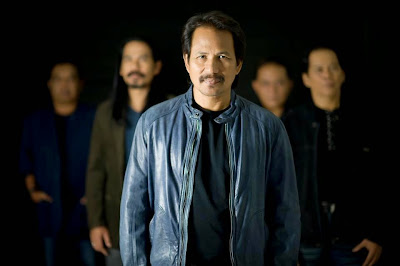 He has composed and sung more than 1,000 folk, rock and pop songs, including some that went on to be favourites on Malay radio in Singapore and across the Causeway, including Isabella, Tanya Sama Itu Hud Hud (Ask The Woodpecker) and Keroncong Untuk Ana (Keroncong For Ana).

Yet Singapore-born music stalwart M. Nasir could have had a different career path if he had followed his original calling – to be a painter.

The 55-year-old, who is getting back together with influential Malay folk band Kembara after 25 years for a concert here next month, once had plans of making it as a painter in France.

“Back in the 1970s, when I was an art student studying at Nanyang Academy of Fine Arts, I was going through what I would call my ‘bohemian’ phase and my dream was to be a painter in Paris,” he tells Life! in a telephone interview conducted in Malay from his base in Selangor.

“Somewhere along the line, the music took over and brought me to where I am today.”

And where he is today is somewhere pretty special on the local music scene, even if he did graduate with a diploma in Western painting.

In an industry that is known for its transience and highly competitive nature, Nasir two months ago was named the highest-earning local composer by Music Authors’ Copyright Protection Berhad, the Malaysian licensing organisation that handles royalties for songwriters and composers there. It was the 13th time that he had won the award.

He became a Malaysian citizen in 1989 and holds the honorific title of Datuk there.

The publishing company and record label that he founded in 1990, Luncai Emas, was named Top Local Music Publisher.

Although the actual figures are not revealed, a report in Berita Harian last year estimates that he collects at least RM300,000 (S$120,000) in royalties alone annually from the songs that he has composed and written lyrics for.

Nasir has come along way since starting out as a lyricist and composer in the late 1970s. In a title that hints at his love for painting then, his first album as a singer back in 1981 was called Untuk Pencinta Seni (For Art Lovers).

But clearly even then, he had artistic flair when it came to writing songs – one of his early tunes, Kenangan Lalu (Past Memories), has even been covered by late Taiwanese songstress Teresa Teng, who sang a Cantonese version in 1983.

However, it was his time as the frontman in Kembara that thrust him fully into the spotlight.

The band’s self-titled debut album, released in the later part of 1981, was a success. Their self-proclaimed “communal folk songs” reflected social issues faced by the man in the street.

Blue-collar anthems such as Bas No. 13, which waxes lyrical about taking SBS bus service number 13 to Geylang Serai, and Duit, a song about being obsessed with money, resonated with fans and are evergreen hits still played regularly on Malay radio.

Of his upcoming concert here, the man, whose full name is Mohamad Nasir Mohamed but is affectionately called “Sifu” (Mandarin for “master”) by music industry insiders, chuckles: “I think the last time I took the number 13 bus was 30 years ago. But I think some of these songs are still relevant today. For the older fans, I think this concert will take them back in time to when these songs became popular.”

The line-up includes his brother Zulkifli Mohamed – better known as Zoul – on guitars, Shahrum Basiron on drums, Rahman Suri on bass and Mohd Shah Othman on keyboards. All are in their 50s and 60s. It will also include cameos by past members A. Ali and S. Sahlan.

As at press time, all the ticket categories for the March 30 concert – Nasir’s third at the Esplanade Concert Hall – are still available. This upcoming concert was rescheduled from last April.

After Kembara disbanded in 1986, Nasir started going to Malaysia to focus more on his lyrics and songwriting rather than his own music.

“There was a lot more opportunities for me in Malaysia because the music scene is much bigger than in Singapore. Kuala Lumpur was the centre of activity for the Malay music industry. It would have been difficult for me to make much of an impact if I were based far away in Singapore.”

The late 1980s and 1990s solidified his reputation as a hit-making songwriter and producer. From folk music, he turned to rock ballads, and churned out hit after hit for Malaysian rock bands such as Search and Wings, for whom he wrote some of their most recognisable songs.

“I listen to a wide variety of music, whether it’s rock, traditional, folk or pop. At the same time, I keep abreast of what’s happening in the current music scene, what the younger generation is listening to. I like to keep up with whatever is new in music.”

To date, he has released seven solo albums which include Solo (1988), Saudagar Mimpi (Dream Merchant, 1992) and Srikandi Cintaku (My Love Heroine, 1999), while Kembara count seven albums in their discography.

Nasir is a Malay music icon who ushered in a new era in modern Malay music, says Yusnor Ef, veteran lyricist and president of Perkamus, the Association of Malay Singers, Composers and Professional Musicians.

The 76-year-old adds: “He writes songs that reflect the soul of the people. His lyrics are poetic and they stand out from the mushy love songs that are prevalent on the airwaves.
“He is also not afraid to use both modern and traditional instruments to create unique new sounds that have influenced a new generation of songwriters.”

Singapore Idol Taufik Batisah, 31, says that working with Nasir taught him that it was possible to be both a popular singer and successful songwriter.

“His music is a constant evolution and through him, I learnt to be flexible and to never be biased against any genre of music in my songwriting and production work.”

More than just a music man, Nasir has also made an impact on the silver screen. His early foray into the world of film began with Malaysian film Kembara Seniman Jalanan (A Street Artist’s Adventures, 1986), for which he wrote the script and played the lead role as a folk singer who has to deal with the seedier side of the music industry.

“I have always been into films ever since I was a child,” he says. “As I grew older, I got into the performing arts. I was hanging out with musician friends but at the same I time I was also getting involved in theatre and dance and I even tried out voice acting for radio.”

Music runs in the family – three of his sons play in indie-rock outfit Pitahati, which is also signed to Luncai Emas.

Today, when he is not busy with his music or running his publishing and record company, Nasir picks up his paint brushes and turns to his old love. Asked if he still harbours his dream of being a professional painter and ever thinks about selling his artwork, he laughs.

M. Nasir..
Sifu Muzik malaysia..
Thanks for this pos..