Listen all, the sifu speaks 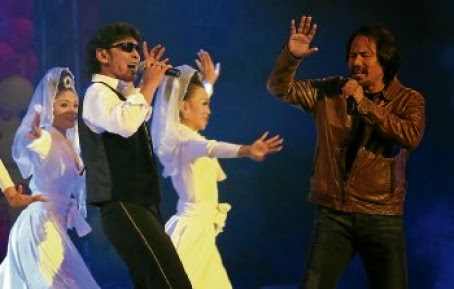 The cosmos is full of ‘stars’, and most do not support life. Here’s an exception

FEW are there among mortals clever in the arts who have the gift of stirring and strumming our spirit, and offering a glimpse into the mystery that is us. Most can give us only a whiff of what is good, and then, they disappear.

Of the admirable first company M. Nasir belongs to. Long have I been fascinated by this genius, from my days in learning and playing until but a few years ago.

Then, perhaps because of a newfound love for strains of folksiness from the Emerald Isle, I ceased to follow the fortunes of this singer-songwriter and actor. I believed him a celestial red giant which had left its brightest and liveliest days behind, and was closer to the end than the beginning.

But lo! There came suddenly his triumph at Anugerah Juara Lagu recently. Memories streamed back, at first Gerhana, and then a deluge from the reservoir of my fondest thoughts of him. He wasn't about to be eclipsed and let me forget him so easily.

There's something marvellously soothing  about this man and his creations, and I came upon them quite by mischief not mine, when I overheard my chums stumbling through Keroncong untuk Ana to tease another about youthful passions and regrets.

It was a time when little was written about local singers, and hard was it for them to rise above the cacophony of the New Age showmen who my generation was besotted with.

Television and radio were full of the foreign acts because they were "refreshing" and "exciting", whereas the home talent was nowhere near. Or so many thought and sought to believe.

But when I chanced upon more of Nasir's treasures, on Pilihan Bersama on 95.3 and in the odd cassette here and there, from friends and pasar big and small, I knew I had found something different and yet, the same. A kindred spirit who lived and roamed in realms I dreamt about, but which I couldn't step into.

This I felt very strongly, although I couldn't quite understand it then, in Layang-layang Terputus Talinya, sung so mournfully well by David and Loga.

It struck more than a chord in me, for I was moved to tears and much later, when I gave thought to it, I realised why.

I saw myself in the allegory, smote by angst and confusion, as must be the miserable fate of unwise teenagers.

It was this then that drew me, again and again, to Nasir and his songs. For so much of his work is a narrative of the seasons of life. Whether he or others sung it, there was the whimsical (Tanya Sama Itu Hud-Hud), separation (Yang Bertakhta Akhirnya), defiance (Rajawali Terbang Tinggi), mockery (Bikin Filim) and love for a warrior (Srikandi Cinta Ku). Doubtless, the imagery was strange and perplexing, but always entrancing.

And yes, there were many love songs, too, but even these stood as masterpieces (Mustika), and I considered them a balm for that segment of fans who must needs it for aching hearts.

He lives with us, but Nasir straddles two worlds -- the present and future. In Anak-Anak Kita in 1993, he was already asking:

My favourite remains Rajawali Terbang Tinggi, where he speaks of fierce courage and independence:

And he gave such a masterful insight into that which is judgmental in man, in Paranoid, which Amy delivered without too much growling and drawling, but with rip-roaring effect that made me tremble with delight.

Reams of writing there are about Nasir and his reach and influence, and little I can add that will extend it.

And yet, here is this. His philosophical motions have stirred the still waters about me, and of a generation's, quite mightily.

Because his songs do not speak only of love between man and woman, which is the wont and weakness of too many in the constellation of lesser "stars", he shows life for the strange complexity that it is, or that which we have made it out to be.

This stage of ours could do with a few more like him.

For if we care to listen, we will hear and know their verses transcend culture and the emotional walls we have foolishly built around ourselves. If we hear differently, may we not see differently, too?

As I hope I do now. In Galway Bay I long for the earth and home, In Bonda I remember a precious soul. My life continues and my spirit rejoices. Thank you, sifu.
Dimasuk ke arkib oleh Saudagar Mimpi pada 4:00 PTG
E-melkan IniBlogThis!Kongsi ke TwitterKongsi ke FacebookKongsi ke Pinterest